AS THE UNITED STATES MOBILIZED FOR WWII, GEORGIANS ANSWERED THEIR NATION’S CALL

Southern states were critical to the war effort during World War II (1941-1945), and none more so than Georgia. Over 300,000 Georgians served in the military, and thousands of civilians worked in rapidly expanding wartime industries.

Heritage Trail visitors can take flight in a World War II airplane, build a Liberty ship, explore a pilot training base, march in the boots of the Band of Brothers, and learn the personal stories of courage, character and patriotism displayed by the men and women involved.

A Trail “passport” has been created so visitors can track their progress along the route, debrief their visit, and receive a confirmation stamp with the “V for Victory!”

EXPLORE OUR STATE’S LEGACY OF INSPIRING WARTIME STORIES AT THE MUSEUMS THAT MAKE UP GEORGIA’S WORLD WAR II HERITAGE TRAIL. 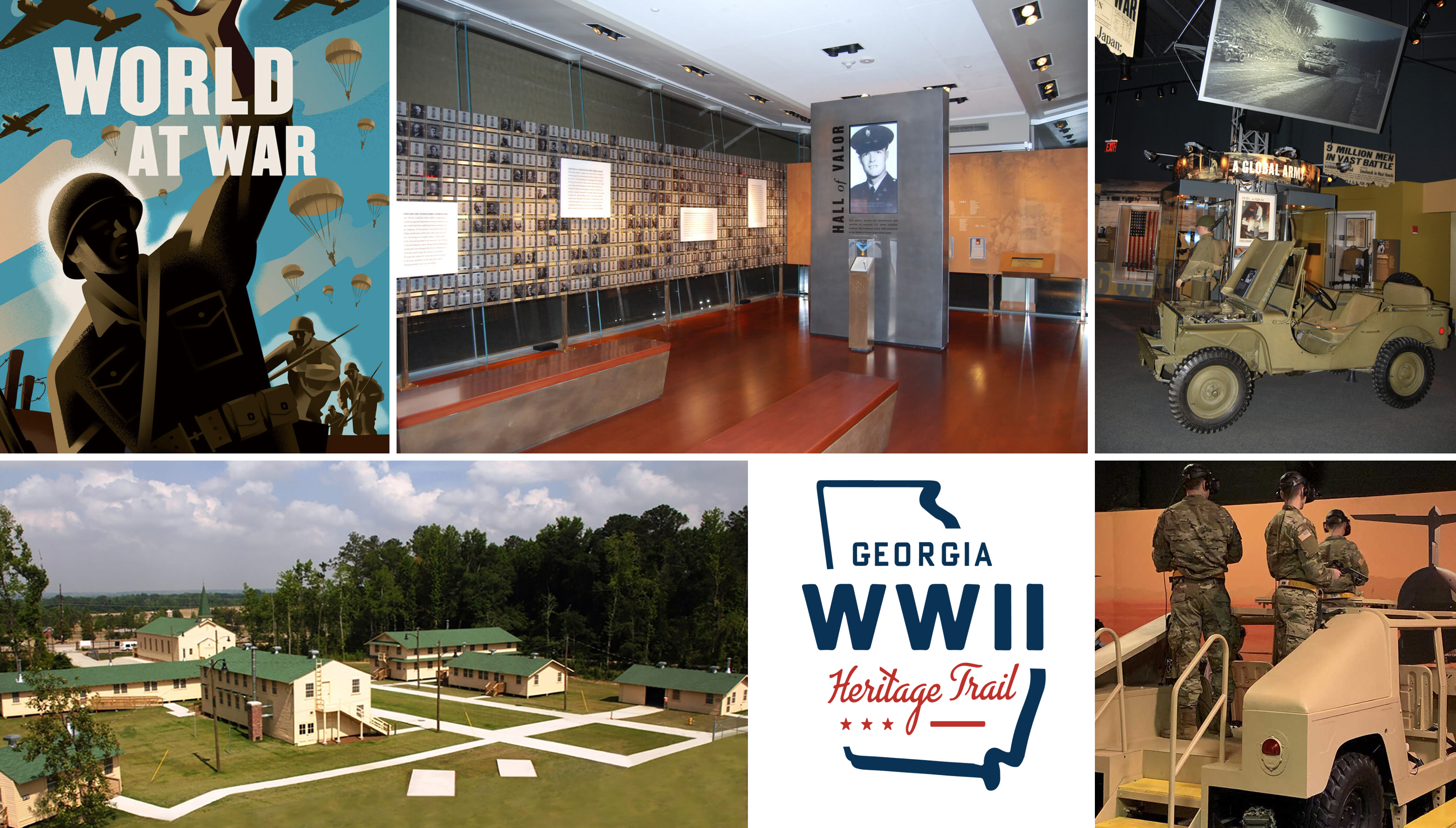 Please note the National Infantry Museum remains closed to the public to protect visiting Soldiers from the spread of COVID-19. We’re hoping the vaccine will curb the virus’s spread so that we can open up again.

Visit the NIM’s World at War: 1920-1947 Gallery containing the largest collection of artifacts on display in the museum, the World at War gallery tells the story of World War II.  A series of audio-visual presentations will transport you nearly 80 years into the past, following the rise of the Axis powers and telling the story of the Greatest Generation’s fight against the forces of fascism.

See the equipment and weaponry that made our victory possible, including Jeeps, parachutes and flamethrowers. The gallery also displays a wide variety of uniforms and personal effects – both ally and enemy – including Audie Murphy’s service ribbons, Hermann Goering’s diamond-studded Field Marshall baton, Emperor Hirohito’s sword collection and the first American flag to fly over Corregidor after the island was recaptured by US Forces.

Step back in time..Walk through World War II Company Street, the only fully- preserved set of series 700 buildings in existence.

Ride in a combat simulator… The virtual reality experience puts you in the boots of a Soldier as you experience a simulated Non-Combative Evacuation Operation (NEO) mission. Experience the adrenaline rush of riding or flying in as an Infantry Soldier and provide cover-fire for your friends and family. Our DownRange Combat Simulators will give you an idea what service members do every day, and why they deserve our respect and gratitude.

Walk among heroes…The Hall of Valor pays tribute to American Infantrymen who have received the Medal of Honor, our nation’s highest award for bravery.