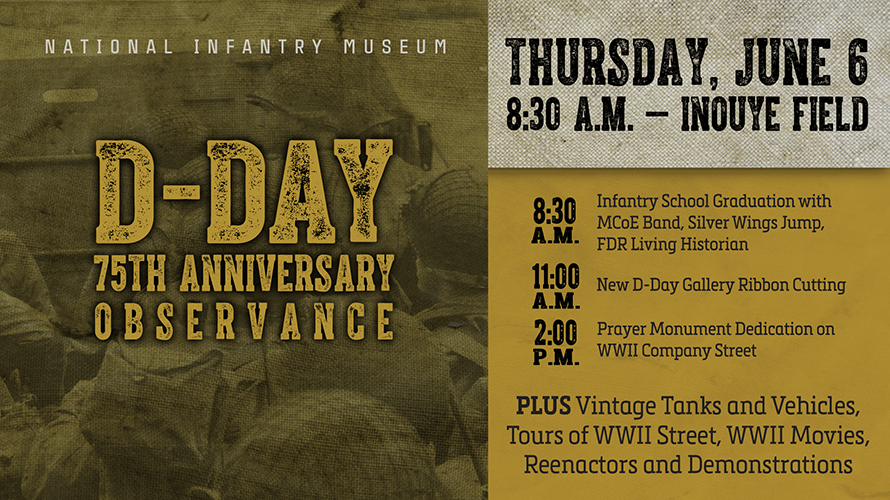 June 6, 2019, marks the start of the 75th anniversary of the D-Day landings and the Battle of Normandy. The National Infantry Museum will commemorate these historic events with a number of events open to the public.

8:30 a.m. – Infantry School Graduation on Inouye Field, featuring a performance by the Maneuver Center of Excellence Band, a jump by the Silver Wings Parachute Demonstration Team and a reading of the D-Day prayer by FDR living historian Robert Prater.

11:00 a.m. – Ribbon-cutting on a new D-Day display in the temporary exhibit space. Guests may also explore a display of World War II airborne equipment and listen to a reenactment of the Army’s OVERLORD operations brief. OVERLORD was the codename for the Battle of Normandy.

12:00 p.m. – Author Jim Noles will offer a lecture and book signing. His new book, Undefeated: A Story of Basketball, Battle and West Point’s Perfect 1944 Season, tells the little known true story of the team’s unlikely rise to the top, and the members’ lost opportunity to play in national tournaments because of a world a war.

2:00 p.m. – Dedication of a new plaque containing the D-Day prayer outside the World War II Street chapel. FDR reenactor James Fowler will read the prayer that Roosevelt delivered to the nation the night of the invasion.

Visitors who have not yet been to the NIM will want to walk the signature Last 100 Yards ramp, where one vignette features American Soldiers facing Pointe du Hoc with intrepidity. And in the World at War gallery, they’ll see the equipment and weaponry that made our victory in WWII possible, including Jeeps, parachutes and flamethrowers. The gallery also displays a wide variety of uniforms and personal effects – both ally and enemy – including Audie Murphy’s service ribbons, Hermann Goering’s diamond-studded Field Marshall baton, Emperor Hirohito’s sword collection and the first American flag to fly over Corregidor after the island was recaptured by US Forces.